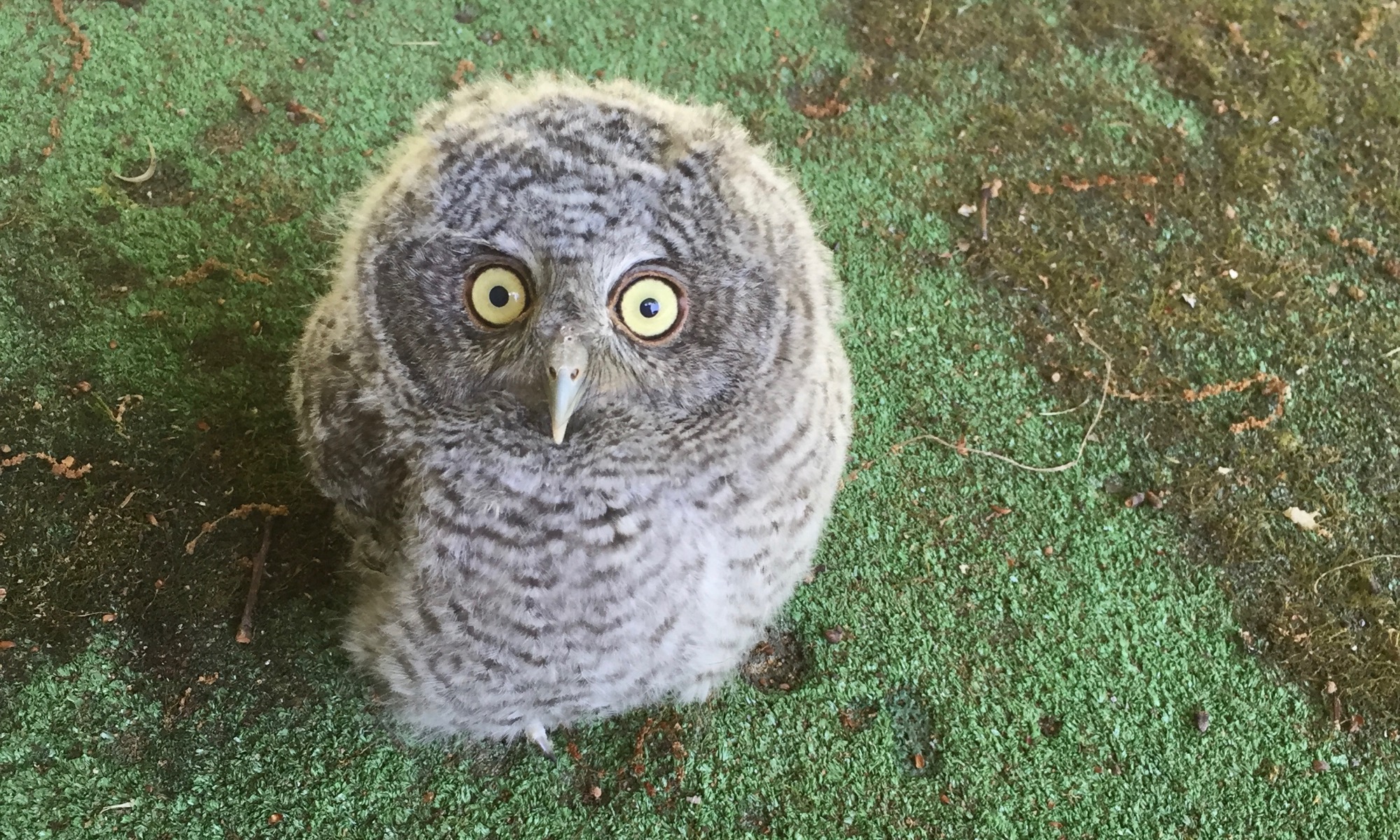 Carl moved on. His dance with depression, with shame, with disillusionment, with fear had taken on a new shape, a shape that I won’t pretend to know. Betsy and I talked about it, and decided that the best thing I could do was to go to Athens with an aim to be present and helpful.

I spent the week immersed in the work of transition: cleaning up the blood from the floor, helping to coordinate the community in their coming together to grieve and to celebrate, speaking about the mechanics of moving forward, and suffering. I drove home late in the night, arriving with nothing left to give.

The next morning the silence was both welcomed and deafening. I was disoriented and exhausted, trying to make sense of my next move for just getting through the day. I felt like a naked man in the middle of a battlefield; all of my armor against life’s blows dissolved.

The fog lifted with the chorus of crows. More than a chatter of mockery and bickering, they were carrying on about some urgent matter. On opening my front door, the racket of the crows on my roof fell into distance. There, sitting on my front stoop, was an owl staring me in the face.

Owl and I stared at each other for some time. I opened the door and walked outside, and the owl just stared. So I sat down with the little owl only a few feet away from me. We sat and stared at each other for the better part of 30 minutes. My need for this exchange to represent a monumental spiritual moment was replaced with the certainty that this owl must be injured. At that exact moment, the owl turned around, hopped a few feet from me, and flew away. 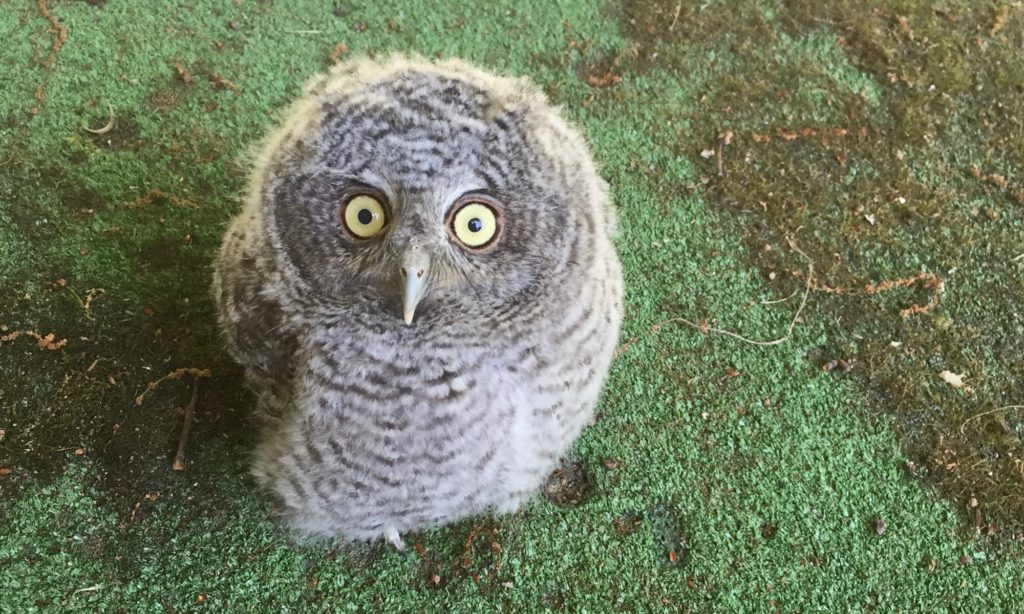 I spent the rest of the morning trying to process all that had happened, from death, to a little owl on my front stoop. I was still home when Betsy was heading out to pick up the kids. I didn’t often have the chance to get my kids from school, and I figured some fresh May air would be good, so I tagged along. Miles and Lela’s schools were separated by a stand of woods. Parents and kids would convene at the edge of the woods, parents chattering on about whatever, and kids bouncing around like particles in the heat. It’s a pleasant commotion, especially when set against the fresh green of the old mountains of Appalachia in the spring. Kids emerged onto the sidewalk from the path through the woods in ebbs and flows. Eventually, so did my daughter Lela, bright eyed and innocent, with a sticker of an owl on her forehead. What.. The…. I asked her where the sticker came from. With a little confusion as to why it mattered, “Uh,.. I don’t know, a friend just came up and stuck it on my head, so it’s on my head Papa.” 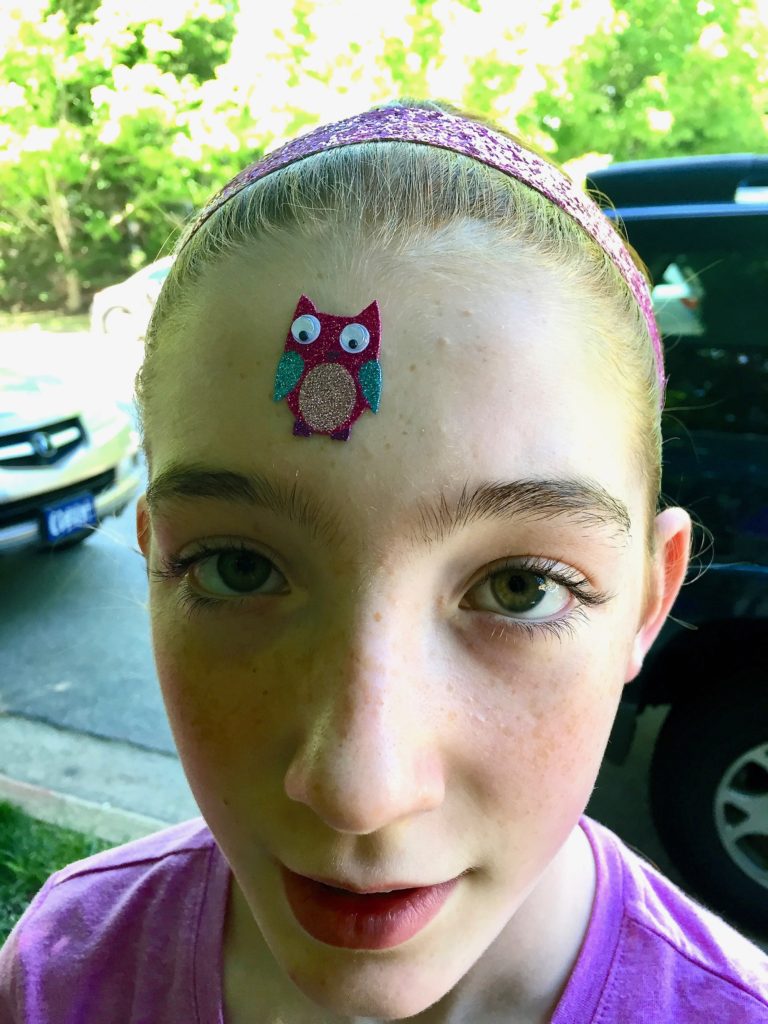 In these moments, I found myself working hard to process mentally, emotionally, and spiritually–more than at any other time in my life. All of the big ideas were looking to find integrity with one another: life and death, being a son and raising children, addiction and mental illness and how they are met in life and death, community, hope, God, and the process used to navigate it all. This was the inception of Making Whole, a merging of all of these ideas into a way to move forward.

Three years have passed. I woke up this morning just outside of Denver, under the shadows of the new mountains of the Rockies. I was a bit worn, happy to steal some extra time in bed to rest with a flight home late enough in the morning to ward off any urgency. Thumbing through my phone I was met by the facebook memory, the picture of my daughter, an owl her third eye.

I’d traveled west to attend the NAATP (National Association of Addiction Treatment Providers) Annual Conference. It was the first time Making Whole had been shared outside my circle of friends and colleagues. This idea that had been gestating, growing in the safety of my own mind, inside the purity of business plans, amongst friends and family- was now being thrust into the world. This was also my first step into an entirely new professional community, a community quite different than the one I had grown comfortable in over the previous 15 years. I went to the conference with the aim to be helpful and present.

I made my way to the airport, stopping for breakfast along the way. I spent breakfast considering the experience of the weekend, particularly an especially warm welcome I received from one individual, the picture of my daughter rotating in and out of my mind. The food was great, the coffee was absolute rubbish, so I was somewhat relieved to have my flight delayed as it afforded me the chance to search out the best cup of coffee Denver had to offer. I did a quick search, found the place that had the most stars, plugged it into my navigation, and enjoyed the 15 minute trip through an unfamiliar town.

I arrived at Little Owl Coffee. 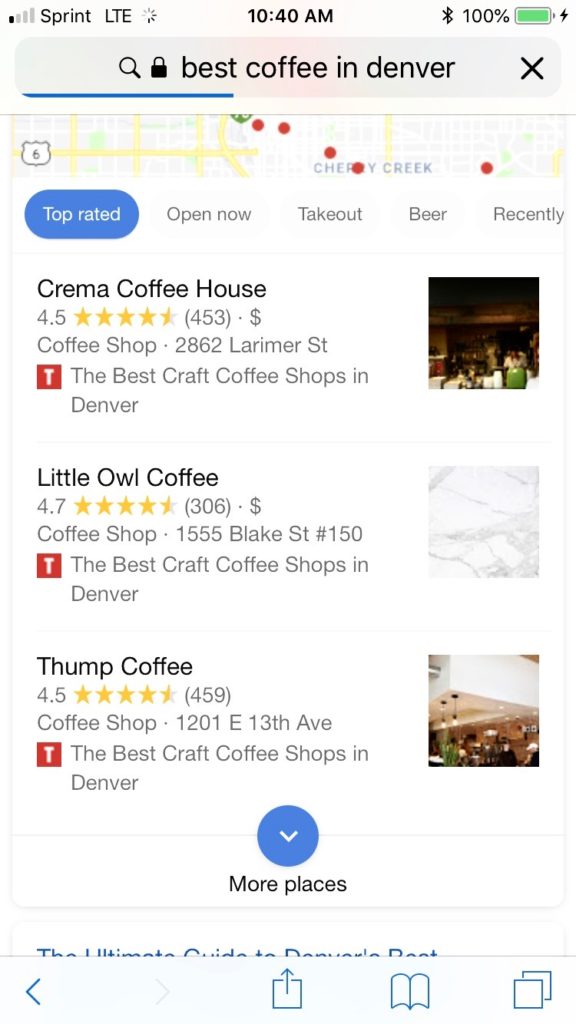 Looking up at the sign it seemed more than just a coincidence. So I began writing this story.

When I arrived home, the first picture in my Facebook feed, was the woman who had been so welcoming to me, she was holding an owl. 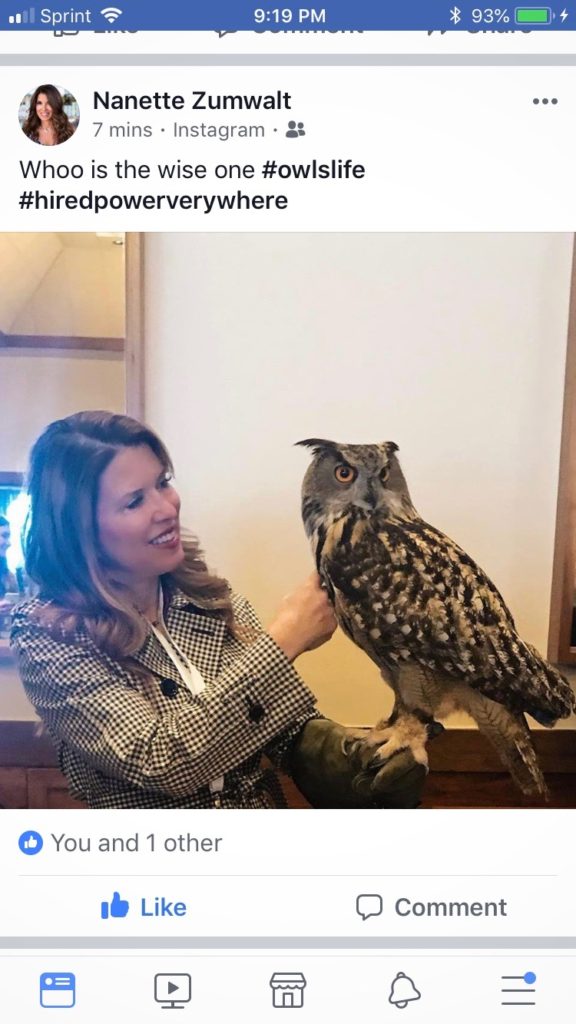 This little owl is following me around. The meaning this owl has is complex, and difficult to explain.

The first question that comes to mind is what the owl is.

Is it God? God is too big an idea to assign to any experience I have. As the Taoists say, if you can see it or touch it, it is not the Tao. I am thankful to have arrived at a time and place in life where the question of what the owl is is no longer terribly important. I realize I live in the infinite, and that is something I will never be able to fully grasp or realize intellectually.

The next question is more interesting to me. How did the owl get there?

I am going to call it a radio station. When I was growing up, the masters of the world carried boom boxes around on their shoulder with the swagger of kings. The Boom Bap of V-103 held court over the world. Radios are nothing short of black magic, a simple assembly of plastic, metal and minerals. Click a button, turn the dial, and music plays. But where does the music come from? It comes from everywhere. Any kind of music you want, it’s everywhere, always. That is crazy. I like to think about trying to explain that to someone who has never seen a radio before, “this little box of plastic and metal and minerals pulls music out of the air.” It doesn’t make sense. Radio waves carry Grandmaster Flash from the radio station to the boombox with perfect clarity, really really fast. Ok.

I am a radio. My intent is the dial. Most stations are nothing more than static. But every so often, I show up with the true intent to be present and helpful without reservation. That station plays Owl.

The question that drives my desire to write this story, to put it out in the world at large, is why the owl is important to me in the journey I am on.

Being helpful and present is a giant risk. All of the outcomes are uncertain, and some amount of suffering is guaranteed. It is easy to lose belief in this journey. It is easy question whether there is a point to making the effort, whether engaging the world with humanity is worth the risk. But those fears and doubts fall away in an instant when the infinite reality delivers a messenger that looks me in the eyes without reservation, and continues to show up as I continue to show up. Even more restorative and invigorating is the idea that this messenger, or at least one of its friends, arrives whenever I am willing to adjust the dial and forge ahead in spite of the doubt.

Making Whole is my effort to bring the owl from the infinite mystery into the lives of individuals. This project is about providing simple companionship and guidance in solving the problems that show up in the present moment. We are using the designing and building of furniture to generate the problems that are to be solved, but furniture is only a symbol. The real work is learning how to be alive in an uncertain moment, to be present and helpful, and to trust that we can be swept up in the radio waves of the infinite if we are willing to show up and tune in.

This is my journey out of the static. This is my invitation for you to join that journey.